The Cabinet met last Wednesday evening to begin the exploration of the "old unknowns", which will be a recurring theme in 2016.

Here in Manitoba we are at the mercy of a government liquor monopoly. Private wine stores are allowed to operate, but the sale of whisky is entirely through the provincial "Liquor Mart". Consequently it is easy to get a quick overview of what is available. When I go into a Liquor Mart my mind immediately sorts the scotch into three broad categories: the known, the old unknown and the new unknown. The known is obvious. Those are perennial stars of the whisky world that any enthusiast is familiar with. The Macallans, the Laphroaigs, the Glenfiddichs etc.. You can recite the list as well as I can. While some of these need to be in the Cabinet's stocks, they do not address its twin core purposes: tasting the unknown to discover new favorites and occasionally taking a risk on an expensive bottle one would not buy for oneself. That first purpose, discovery amongst the unknowns, is where we're headed today.

Ok, "the unknowns". Cool. Agreed. But what do I mean by dividing them between the "old unknowns" and the "new unknowns"? Quite simply, the "old" are products that have been around for a long time, often with traditional age statements, but may be from lesser known distilleries, or somehow just escaped our notice before. The "new" are the recent bottlings, often from well known distilleries, often deviating from traditional age statement naming protocols. Glenlivet "Guardian's Chapter", Bowmore "Tempest" and Oban "Little Bay" are examples. By no means am I making a qualitative distinction - until we taste these we do not know - but the new are not our focus at the moment. 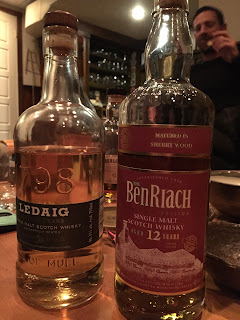 To begin sorting through the old unknowns I looked at the 2015 World Whisky Awards for rough guidance. Very rough guidance. The first of these is the Benriach 16 year old, which was awarded "Best Speyside Single Malt". And you know what? We liked it. We liked it a lot. That said, we did not appreciate the "polished mahogany furniture, sweet ginger bread and Japanese incense" promised in the WWA literature, but none of that seemed necessary or, frankly, desirable. As an aside, TheCabinet is now absolutely convinced that there is a Random Whisky Adjective Generator out there somewhere, although Google cannot find it. It must be on the dark net. Our solemn pledge to you is that should we ever find it we will take steps to destroy it. So, if not essence of antique china cabinet, what did we taste? This Benriach is a very dense and rich dram. There is fruit such as pear or apple on the nose and some sweetness in the mouth, but backed by intense malt character and edged with an alcohol burn. A few drops of water made this one even better. It has a lovely long finish as well. We scored a 6.8, which is a solid Three Drams (good, recommended, must try) on our scale.

At this point conversation devolved into one of our periodic debates about the scoring system, with one member touting the advantages of a five point scale. However, ten prevailed again as it speeds the decision making. On a five scale one might debate, "Hmm, is it a 2 or a 3?" On a ten scale you have that in-between number. With averaging you are going to generate fractions regardless of whether it is a 5 or 10 or 20 point scale. We have no foolish or statistically unsound pretense that, say, a 4.3 is better than a 4.2. This is why the scores are converted to our "Honest Whisky Rating" which groups them in broad categories. Anyone wishing to score on a five point scale is encouraged to simply use the even numbers between 1 and 10. Also decided: the number of angels who can dance on the head of the pin is dependent on (a) the size of the angels, (b) the size of the pinhead and (c) how friendly the angels are with each other. 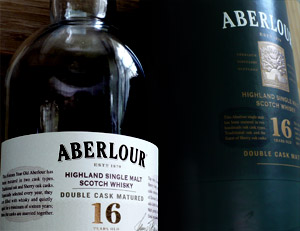 From there we strayed away from the award winners and pulled out the Aberlour 16. It had been tasted before and not enjoyed but we had vowed to give it another chance. It roughly fits in the "old unknown" category, so tonight seemed as good a night as any. We still did not enjoy it. We didn't hate it, but we didn't enjoy it either. Simply uninteresting and bland. Score 4.2, or just into the Two Drams category.

Worse still was the Glenmorangie "Original". Their "Quinta Ruban" was 2015's "Best Highland Single Malt 12 years and Under" and we have liked it very much as well, but our stocks were sadly depleted. The "Original" is not a substitute. Like the Aberlour, bland and blah. Not offensive, but a waste of a clean glass in its resounding mediocrity. Score 3.5 = One Dram. 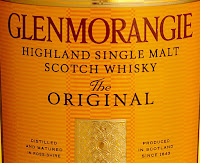 So, two great and two not. We wanted to end on an up note, so another half pour of the Benriach was offered.

And thus concludes another enjoyable evening of whisky sampling, lively conversation and, in this case, excellent charcuterie, courtesy Grant and Cory.

Slainte!
Posted by Philipp Schott at 10:23 AM