Simply "peat". Please take a moment to gratefully acknowledge that I have sidestepped the damnable puns and cliches favored by whisky writers. No "Re-Peat" and absolutely no "For Peat's Sake". The latter gets 16,200 Google hits (and that's with it put in quotes to preserve exact word order). Which is 16,199 too many.

So yes, the Cabinet met last night to discuss the role that peat plays in single malt scotch whisky. We were joined by an especially special guest (and with apologies to the other guests who I have referred to as merely special), Carissa from Mumbai India. What makes Carissa especially special is that she organizes two, or it might even be three, whisky tasting clubs in Mumbai and she has met an astonishing number of distillers and whisky world luminaries. She has also tasted an inspiring range of malts and, more impressively, appears to remember them all... We also had an additional special guest, Kevin. From Winnipeg. Unacquainted with any distillers or whisky world luminaries but well acquainted with fine art of telling jokes. 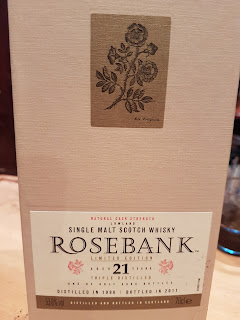 It is our custom to allow a guest to chose the first dram from the Cabinet stocks. Carissa selected the Rosebank 21 year old, a lowland whisky from a now shuttered distillery. This is a fiery cask strength whisky with the classic lightly herbal and floral lowland profile backed up by a solid malt core. It is not special in that is in no way complex or exciting, but it is special in that the distillery no longer exists. We drained the last few drops from the last bottle we will likely ever have. The sensation was somewhat akin to eating a baby northern white rhino.

But the peat, we're here to talk about the peat. As Michael poured out solid drams of Ledaig 10 I stood up and prattled on a bit about how peat becomes peat and how peat becomes part of whisky and how, chemically speaking, those beloved leathery, rubbery and bandagey notes relate to peat. Eyes began to glaze and heads to nod, but fortunately I had also lit some peat on fire and handed out small pucks of peat for the members and guests to examine and sniff. It's better to be "interactive". And the best kind of interaction is of course with the whisky itself. The Ledaig was reviewed just two meetings ago and our opinion still stands, bolstered by similar thoughts from the guests: 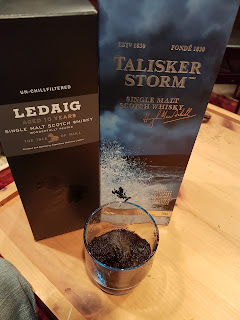 Our next example of a peated whisky was the Talisker "Storm". This sparked the only controversy of the evening. Two of the assembled company were vocally underwhelmed, one to the point that a glass
was left partially unfinished, an almost unheard of event (though memorably a large quantum of Glen Breton was once poured down the sink). Four others who had been present in the fall when it was last tasted maintained a diplomatic silence for this is what we said then:

It was with a great deal of trepidation that I selected a bottle of Talisker "Storm" for this evening. Don't get me wrong, Talisker is a true classic, but their forays into marketing department driven branding make The Cabinet nervous. Storm? What does that actually mean in a whisky context? Only rainwater collected in winter gales used? Distillery now placed on a herring trawler? Fie. But no matter. We decided that the poor master distiller had this name forced upon a product that he still created with the same care, attention and craftsmanship as its more sensibly named predecessors. And we were right. Here was balance. Here was complexity. Here was the sea and the land and the peat and the wood and everything we love about scotch whisky. 7.7; high up in the Three Drams range. And oh, the medicinal effect? Talisker is well known for its ortho-cresol content. Ortho-cresol as in creosote. As in coal tar. Toxic, corrosive, kind of nasty and oh so tasty. And quite the opposite of healthy. We just had to cap the evening by being contrary.

Note to readers: I do apologize for all this cutting and pasting from previous posts. It's cheap and lazy. Which is why I do it.

Reasonable people can reasonably disagree, although in truth the vocally underwhelmed rattled my confidence a little in our previous judgment. We'll just have to try it a third time! 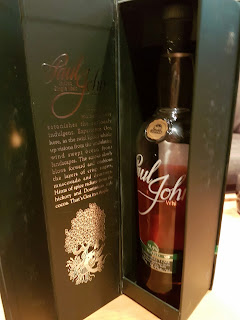 And finally the genesis of the peat theme this evening: Carissa had brought a bottle of Paul John peated single malt whisky from Goa, India. Yes, Goa. It's hard to imagine a locale less associated with single malt in most people's minds. Right up there with Fiji or Egypt. But indeed, since 2012 there has been a distillery in Goa and what a distillery. To those of you for whom Indian whisky means Amrut and for whom Amrut is a byword for crap, Paul John is a revelation. Not only is it not crap, but it is in fact very good. Not only is the quality a surprise, but the entire whisky is a surprise. To begin with, although peated malt was apparently used, the peat character is completely submerged under an intense sweet dark fruit flavour overlay, like raisins, like molasses, like... rum. This whisky tastes like a lovely aged rum. Perhaps an 18 year old Flor de Cana. And the colour. For a whisky whose oldest components cannot be more than four years it has the deep mahogany colour of a 21 year old sherry cask finish. Apparently the tropical heat greatly accelerates aspects of the aging process. And then finally the alcohol. This is a 55.5% fire bomb, yet none of us added water. The rummy sweetness smooths it and softens it.

Very interesting. Thank you Carissa! It's really an "apples and oranges" scenario when it comes to comparisons with traditional scotch whiskies. In fact last night the Rosebank and Paul John beautifully illustrated opposite ends of a series of spectrums: old and new, light and dark, astringent and sweet, austere and complex. As the rhinos dwindle away other species begin to proliferate... 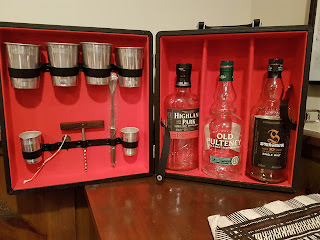 Posted by Philipp Schott at 7:52 PM